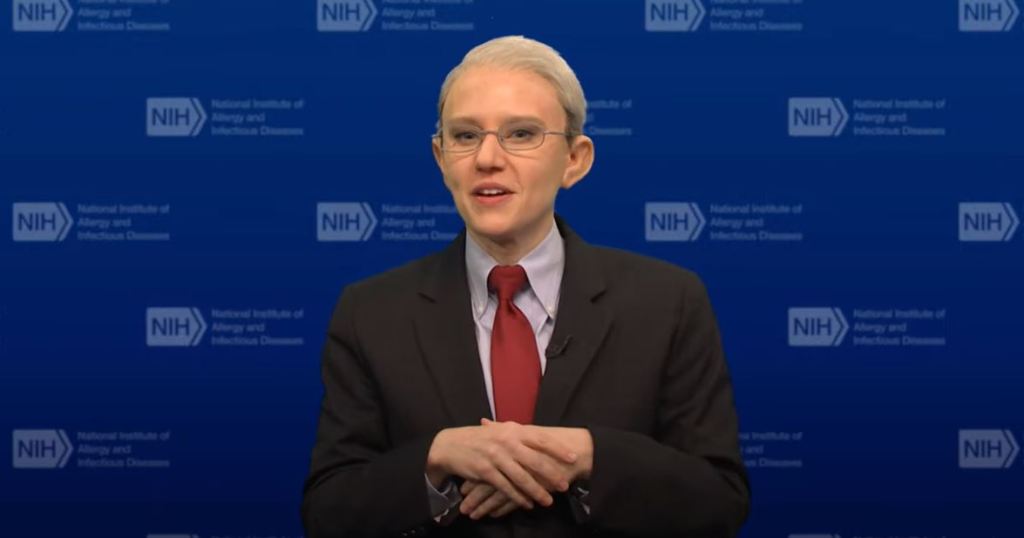 UPDATED with video: Saturday Night Live opened tonight with an Anthony Fauci-hosted game show, So You Think You Can Get the Vaccine, a riff on the confusion over just who can get a vaccine now and who can’t.

With Kate McKinnon returning as Fauci, the director of the National Institute of Allergy and Infectious Diseases, the skit provided an opportunity for the show to also get in a few satirical digs at three Democratic governors facing political turbulence: the judges on the game show are Gavin Newsom (Alex Moffatt), Andrew Cuomo (Pete Davidson) and Gretchen Whitmer (Cecily Strong).

“He’s hated by every single person in California except those 10 people he had dinner with in Napa that one time,” Fauci says as he introduces the governor of the Golden state.

“What can I say. I love dinner,” Newsom says.

Then to Cuomo, who was spoofed last week. Since then, though, he was accused of sexual harassment by two women, although he denied the allegations.

McKinnon’s Fauci introduces him with this: “He’s currently under fire for futzing with dead people and also for the kind of sexual harassment allegations that make it you, yeah, I could see that.”

“Hello, nice bodies, some of you,” Cuomo says. “I know. I know. I am in the friggin doghouse again. Remember when your favorite movie was my PowerPoints? Remember, ‘Today is Tuesday!’ Why can’t we go back to that? I mean, come on.”

Then to Whitmer, introduced as someone who “narrowly escaped being kidnapped by a group of men whose fingerprints probably have Cheetos dust on them.”

Whitmer says, “It is an honor to be here with my fellow governors. People yell at them about their policies and they yell at me, ‘Get her!’ But that’s life.”

The contestants each have to show why they qualified for getting a vaccine, making the argument for why they were “essential.” As Fauci points out, an “essential” worker can differ in each state. In California, it’s “police, hospital staff, neuropath and psychics,” Newsom says. In Michigan, it’s “fishers, truckers, trappers and drifters,” Whitmer says. In New York it’s “tough guys, wise guys, rich guys and fine guys,” Cuomo says.

The first contestant is a woman from Michigan.

“I actually voted for you,” the woman says.

“I voted for you to get kidnapped, but still,” the woman replies.

The woman thinks she is an essential worker, and should get the vaccine, because she does IT for the “OnlyFans website, so I am busy.”

“Do you have any pre-existing conditions?” Whitmer asks.

“I have a really bad attitude. I am allergic to dust, and I don’t know if this is anything, but I have herpes,” the woman says.

Fauci does offer consolation prizes, like a Pfizer visor, and “if you don’t get the vaccine, you might take home Maxine, the cranky middle aged woman from the Hallmark cards.

Other contestants are a pretend grandmother, a pregnant woman, and a New Jersey cigarette smoker. None qualify. Ted Cruz (Aidy Bryant) also tries, in a mockery of the real Texas’ senator’s attempt at standup humor at this week’s CPAC.

“Oh, it is great to be back in New York City. I’m sorry my arms are tired because I just flew back from Cancun, Mexico,” Cruz says, finishing with his CPAC scream, “FREEDOM!”

Finally, the show gets down to the last contestant: Seymour Foreman, 85, who actually does qualify for the vaccine.

“Do I get it here or backstage?” he asks.

“Oh no, you can’t get it here, you got to make an appointment online,” Cuomo tells him.

“On what, how do I do that?” the old man asks. State and local websites for vaccine signups have been confusing and have crashed.

The show gets one last dig in at the New York governor, as Cuomo assures the old man, “If you do feel sick, make sure you get to the nursing home and get to the hospital. Wink.”

The opener was much more focused than in recent weeks, and the best lines may have been about the sponsor of the game show, CVS. As Fauci says, “Come for the show. Leave with a lollipop from two Halloweens ago.”

‘The Bachelor: After The Final Rose’: Emmanuel Acho To Fill In For Chris Harrison As…

Inside the Collab Crib: Meet the Ladies Taking Over TikTok…

90 Day Fiance: Julia Gets ANNOYED by Brandon While Wedding…